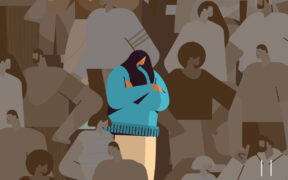 Perhaps it is time for all colleges and universities to have a minister of loneliness as a full-time position on their campuses. I’ll say more about this position below, but first, some background.

Perhaps it is time for all colleges and universities to have a minister of loneliness as a full-time position on their campuses. I’ll say more about this position below, but first, some background.

Gen Z (ages 18–22 years) individuals are especially prone to feelings of loneliness. These feelings of loneliness function as an alarm bell signaling that one’s fundamental need for social connections and belonging is not adequately being met. Loneliness in the context of college was pervasive and of great concern even before the pandemic. According to a 2019 study (Psychology Today, 2019), 30 percent of undergraduates reported feeling “very lonely” in the past two weeks, and 67 percent reported feeling “very lonely” in the past year. Loneliness among college students is associated with lower social adjustment to college, lower perceived social support, and lower feelings of campus belonging. Incoming college students face a major social transition and may be vulnerable to feeling lonely. As students enter college, they begin to form new routines, new habits, and new relationships that can have powerful recursive effects over time. As students enter college, they are a mere three months removed from high school and possibly only a day removed from the home and community that they are familiar with—and have been for the greater part of their lives. They will be leaving an environment where they knew a great many people, several whom they considered friends. Many were active members of their community and high school. Some were members of athletic teams, debate, clubs, and volunteer groups, et cetera. Some degree of anxiety is to be expected. But this does not make it any easier to cope with.

Academicians should be aware that colleges are often equipped with resources and services that can address the issue of loneliness for their students, staff, and faculty. These services—such as group sessions, individual counseling, and a plethora of additional options—typically are available at many colleges and universities for students and employees in the college community.

What about the faculty?

A famous line in Roy Orbison’s 1960 hit declares, “Only the lonely know the way I feel tonight.” It appears that Orbison was right all those years ago as a surprising number of college faculty and administrators today understand precisely how he felt. The sudden and unanticipated pivot from in-person to remote teaching that began in early 2020 with the spread of COVID-19 presented many challenges to faculty who enjoyed their daily interactions with both students and their colleagues. This abrupt unforeseen lifestyle change affected the quality of people’s work as well as their general satisfaction with life.

Universities were created to be places where people learn and educate together.

It appears that COVID-19 has severely restricted the togetherness that was so appealing a short time ago. A survey in the UK (Sibai et al., 2019) titled “Overworked and Isolated: The Rising Epidemic of Loneliness in Academia” found that 46 percent of researchers feel lonely at work. This phenomenon is particularly common among early career academics; 64 percent of PhD candidates report such findings. This study found that 40 percent of academics, comprising more than half below the age of 35, view loneliness at work as the main factor affecting their mental health. Some educators feel geographically isolated because they are not attending in-person conferences as well as not being able to physically attend department and university-wide meetings. A number of faculty feel socially isolated when they cannot make meaningful relationships with others in their fields. Some academics feel they do not have the technical knowledge to participate in the global conversations of their fields. Thus, many academics are turning to counseling to learn ways to cope with the emotional stress brought on by feelings of loneliness.

Returning to campus once the pandemic started to subside didn’t resolve the problem for many academics. On April 8, 2022, The New York Times reported, “As more workers return to their offices, many are bringing deep emotional and mental scars from the pandemic to their cubicles—and at a time when the world feels particularly unstable” (Wolfe & Wartik, 2022). Higher education was not immune from these difficulties.

Rook (1984) wrote that “Loneliness is defined as an unpleasant emotional condition where a person feels estranged from or rejected by others and feels deprived of secure and close relationships in his/her social environment.” (p. 239). A quick way to think about loneliness: the difference between how much social connection/interaction people want and how much they are getting, and these relationships should be positive and important to the person.

Loneliness is an ecumenical emotion that is distinctive to each person. There is no single cause. Therefore, the prevention and treatment of loneliness as a potentially damaging state of mind can vary dramatically from person to person. Therefore, loneliness can be viewed as an inherently interpersonal and relational emotion (Weiss, 1989).

The world is lonely

In 2020, Dr. Vivek Murthy, now surgeon general of the United States, declared that loneliness should be considered a public health concern, calling it “a root cause and contributor to many of the epidemics sweeping the world today – from alcohol and drug addition to violence to depression and anxiety” (Murthy, 2020, xix). Also, in a 2018 report, the Kaiser Family Foundation found that 22 percent of all adults in the United States (more than 55 million people) described themselves as lonely or socially isolated (DiJulio et al., 2018).

Over the past two decades there has been a threefold increase in the number of Americans who say they have no close confidents. More than 55 million people in the US described themselves as lonely or socially isolated. One of our responses to COVID-19 has been social distancing—stay six feet away! This is really a misnomer. Don’t we really mean physically distancing, because we engage in phone conversations, text and email each other (incessantly), attend Zoom meetings, et cetera?

Perhaps it is time for US institutions of higher education to follow one approach to combating loneliness in the United Kingdom and Japan: appointing a minister of loneliness at the dean’s level or above.

Under the direct leadership of the minister of loneliness (Cipriano, in press):

Musings on the epidemic of loneliness

Loneliness is a universal condition that affects all of us directly or through the people we know and love. Since 1985 the number of people in the US who indicated they had no close friends has tripled. Loneliness is also a strong predictor of poor health. Loneliness has an equivalent risk factor to health as smoking 15 cigarettes a day and can shorten one’s lifespan by eight years. It poses a greater threat to health than obesity. Connection is the best antidote to loneliness. Institutions of higher education should strive to develop a “culture of connectivity.” Universities should place an emphasis on mental health support by updating the health guidelines and providing on-line guidance to offer pragmatic strategies for dealing with loneliness.

Sibai, O., Figueiredo, B., & Ferreira, M. (2019). Overworked and isolated: The rising epidemic of loneliness in academia. The Conversation. https://theconversation.com/overworked-and-isolated-the-rising-epidemic-of-loneliness-in-academia-110009

Robert E. Cipriano, EdD, is a senior partner in ATLAS: Academic Training, Leadership, and Assessment Services. Email: rcipriano@atlasleadership.com. Bob will be presenting a session titled “Toxic Loneliness and the Academic Department” at the 2022 Leadership in Higher Education Conference in Baltimore in October.