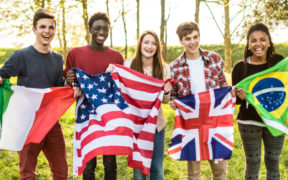 The National Association of Colleges and Employers (NACE) includes global and intercultural fluency in its eight Career Readiness Competencies, and yet in its latest survey (2019), employers rated college graduate readiness in this area as ...

The National Association of Colleges and Employers (NACE) includes global and intercultural fluency in its eight Career Readiness Competencies, and yet in its latest survey (2019), employers rated college graduate readiness in this area as 3.13 out of 5. Although international virtual exchange (IVE) has been used by some universities for several years, many are now seeking to institute or expand these programs for students.

When we initially think of international virtual exchange programs and opportunities for undergraduate university students, it’s easy to highlight the short-term benefits of the experience. Examples include cross-time zone collaborative skills, intercultural growth, and exciting new partnerships with the benefit of added friendships. Most IVEs are offered in post-first-year courses for undergraduates. But when offered earlier in an academic program, these opportunities may serve as a foundation and inspiration for students. The valuable initial benefits can favorably transfer to other academic and professional experiences and continue to benefit the student after graduation.

In the LeBow College of Business at Drexel University, IVEs (what we refer to as Global Classrooms [GCs]) are offered in the first semester, first-year core curriculum. These GCs connect our first-year students with partnering universities (faculty and students) around the world to complete a variety of globally themed and focused projects. The GCs have become the catalyst for students to pursue additional global experiences after their introductory course concludes. In fact, 35 percent of our first-year students who participated in the GC go on to partake in at least one additional global opportunity within their academic career—approximately three times higher than the national traditional study abroad average of 10 percent (from the Institute of International Education’s Open Doors Report on International Education Exchange). In fact, approximately 25 percent seek the additional global experience within two years of completing their initial GC, well before traditional study abroad generally occurs for undergraduate students.

Christian Maxey (coauthor) knows this path well. A current fourth-year senior in LeBow College, he participated in five international experiences after his first GC exposure: another GC, three ICAs, and Global Engagement Scholars. His interest peaked early on when he saw how enjoyable his activities were in his first-semester GC; he quickly found the professional and personal growth associated with them as well. Christian became a student leader on campus, in notable roles including director of culture and discovery in student government and a teaching assistant for various global classroom courses.

And Christian is not alone. In addition to the research about how many and which post-GC experience participants chose, we have explored the impact of the first semester, first year in the longer term—toward the end of their academic time and after graduation.

Using the students who participated in the GC program as first-semester first-years in fall 2014, 2015, and 2016, we created a survey to conduct further research of these longer-term impacts. We focused on four key areas: professional advantages, personal development, academic evolution, and garnered skills. The survey was sent to 99 individuals, 44 of whom responded. The respondents ranged from near-graduating seniors to those already successfully in the workforce for one to two years. The results are both meaningful and encouraging, support earlier research on the knowledge, skills, and attitudes (KSAs) garnered immediately post-participation, and confirm the far-reaching and positive impacts these experiences have on our students.

While students who participate in the GC during their first year may not always be thinking about longer-term professional or career impacts at the time, our respondents reported that they were quick to use the knowledge, skills, and attitudes from their GC experience in a professional setting. For example:

Christian’s first-year GC partnered with the Berlin School of Economics and Law (BSEL) in Germany. His team (consisting of both Drexel LeBow and BSEL students) was charged with developing and pitching a new product concept that had market potential in both institutional locations and that was potentially socially focused. Christian and his teammates noted that with two completely different student groups, each with unique demographics and cultural backgrounds, they had an opportunity to use their diversity to research, plan, and present a new idea. Not only did they virtually collaborate and communicate from different areas of the globe, they also learned from and engaged with others in the process about their areas of study, culture, and life.

Christian’s experience mirrors our other respondents’. Students were asked to report how impactful certain skills gained and developed from the GC experience were. Respondents reported a high or very high impact on their knowledge, skills, and attitudes, particularly in five major areas:

When our students sought subsequent courses and academic opportunities, many of those selections were internationally focused or influenced by their GC experience. Seventy-five percent of respondents stated they were more likely to participate in an additional academic opportunity that was globally based, such as an internship or an internationally focused research project, because of the GC influence. And over half of respondents acknowledged directly using skills from the GC in these additional academic endeavors.

Our research found that adaptability, effective communication, diversity awareness, conflict resolution, and personal growth and awareness, were the five key takeaways for GC participants. Respondents also used adjectives such as immersive, transformational, and enriching to describe their experience. Overwhelmingly they indicated they had been affected positively from their GC participation. The top 10 words respondents used to describe the experience were as follows:

With partners across the globe, including Heilbronn University in Germany, Amsterdam University of Applied Sciences in the Netherlands, and Leeds and Strathclyde Universities in the UK, our first-semester, first-year Global Classroom’s approach influences students to stay globally engaged long after their first year and far beyond their college career.

Now about to enter the workforce, Christian looks forward to continuing to use the knowledge and skills he has gained from his international involvement that began in his first week of classes as an undergraduate student. He has been very active at Drexel in a variety of roles to encourage students, both incoming and active, to “go global” like he did, and he is quick to share how he has benefitted from the initial GC and all of the later experiences. Currently a senior teaching assistant for the first-year GC course and additional Civic Engagement courses, Christian is able to showcase how going global out of the gate affected him in the long run, including contributing to the student, teammate, and future educational-leader that he is today. Christian appreciates that the experience pushed him out of his comfort zone but then opened a door to a world he previously did not know existed—an opinion shared by many other participants.

In conclusion, our research found that first-semester, first-year students benefit following a GC experience both shortly thereafter along with many years later. The early exposure to virtual exchange links to a global engagement three to four times the national average, and it is sought and experienced much sooner than traditional study abroad. We are encouraged to see how students are impacted long after engaging in the GC. While their undergraduate time may come to an end, they will take these global memories, skills, and competencies with them as they embrace postgraduate endeavors. As one participant from the first offering of this global classroom noted, “learning to adapt to and work with [different country cultures] from early on freshman year automatically puts you ahead of the competition.”

As you consider implementing new IVE projects into curriculum or enhancing those options you may currently have, we encourage you to consider including first- and second-year opportunities to support students’ overall academic opportunities as well as their postgraduation career readiness.

Both Jodi Cataline, MBA, and Dana D’Angelo, MBA and CPA, are clinical professors and Center for Teaching Excellence fellows at Drexel University. They have a combined 50 years in higher education and have been working in international virtual exchange, short-term study abroad, and international research for nearly a decade. They can be reached at jkc27@drexel.edu and danad@drexel.edu, respectively.

Christian Maxey is a senior at LeBow College of Business at Drexel University, majoring in organizational management and operations and supply chain management. He can be reached at cjm455@drexel.edu.