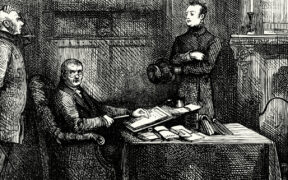 Jarndyce v. Jarndyce, the infamously dreary lawsuit at the center of Dickens’ Bleak House, dragged on for generations, cost a fortune, and fostered a climate of secrets, despair, and suicide, in which “. . . whole families . . . inherited ...

This article first appeared in the December 2012 issue of Academic Leader.

Jarndyce v. Jarndyce, the infamously dreary lawsuit at the center of Dickens’ Bleak House, dragged on for generations, cost a fortune, and fostered a climate of secrets, despair, and suicide, in which “. . . whole families . . . inherited legendary hatreds.” Ultimately Bleak House contributed to 19th-century reforms of the English legal system, but it has also become a shorthand term for the wasteful destructiveness that affects all participants in a lawsuit.

As an academic administrator (usually as a dean, but also as a chair, a provost, and a faculty member), I have been a close observer of the consequences of poorly structured evaluations, which can, in the worst-case scenario, lead to destructive and expensive litigation and which certainly are painful for the individuals involved. What is often unacknowledged is that poor performance review processes can lead to whole departments inheriting legendary hatreds.

Case #1: All concerned agreed that the candidate was fatally flawed in some important respects with an inadequate preparation in the field, cavalier treatment of teaching responsibilities, and an inability to place research in appropriate scholarly venues, and he was disengaged in the department and the broader institutional community. But none of the written annual departmental evaluations were explicit in spelling out the problems, nor in addressing remedies, although the personnel committee had repeatedly warned him verbally. The dean threw up his hands, consulted with the provost and legal counsel, and supported the faculty member for tenure, infuriating the faculty for “saddling us with deadwood for the next 30 years.”

Case #2: While the faculty member was brilliant in her creative field, aspects of her job description were repeatedly ignored (judging regional theater competitions, recruiting on high school campuses, etc.) She was late for her undergrad courses and often cancelled appointments with her grad students because of her own performances at the major metropolitan center nearby. She never held office hours, despite a contractual obligation to do so. But the department personnel committee was split, with some faculty arguing that her brilliance in her field—and her international reputation—outweighed her nonperformance in the areas of teaching and service. A divided department split on the tenure vote, and the independent letter by the department chair did not support tenure. A leader of the group supporting the faculty member railed against the chair, claiming that “he has no artistic soul” and “isn’t fit to lead a department of this caliber!” Although the faculty member left the university, distrust of the chair’s artistic standards persisted, and the department continued to be divided over criticism that the chair was a “petty bureaucrat.” The chair eventually resigned and retreated into departmental inactivity.

Case #3: An untenured faculty member who had been heavily recruited because of excellent potential in a hard-to-find field had a terrible first two years at the university. He had a death in the family that left him the primary caregiver for an elderly family member and her handicapped child. He met his teaching responsibilities in a perfunctory way and managed to gather some data for his research, but published nothing. The department was divided about what to do; there were no other junior faculty in the department, and they worried that the line would never be replaced if they failed with this young man.

We often worry—and rightly so—about the consequences of negative evaluations on the individual being assessed. We are very much aware of the high costs of litigation and even more aware of the negative consequences of getting this all-important decision wrong. But we rarely consider the impact on the department itself of poor evaluation procedures. In each of these cases, poorly conducted evaluation processes and a lack of consultation increased the stress on the department, both immediately and for the long term, regardless of the whether the faculty member stayed. So what went wrong? How could better processes have helped the department avoid internal division, distrust of the administration, and personal pain in these situations? While this is not legal advice, I do have some suggestions about how these situations could have been avoided.

Case #2, Rule #2: Retention, tenure, and promotion standards have to be crystal clear, and all those engaged in faculty evaluation need to be trained both in their application and in the process as a whole. In this case, because the department standards were unclear as to the relative weight of service (recruitment, community relationships), teaching and advising, and scholarly and creative activity, members of the department were not given any way to weight the lack of contribution in two critical areas. The department chair had drawn attention to subpar performance in the areas of teaching and service and developed with the dean a remediation plan, which the candidate failed to address—perhaps because she determined that senior faculty did not believe the deficiencies to be important. In the future, a first step would be to undertake a discussion of the department’s standards, perhaps facilitated by an outsider given the level of anger resulting from the experience. Revision of departmental policies is tricky since these documents need to be congruent with university, college, and possibly union documents but also with the standards of external discipline-specific accrediting bodies (NASM, NSAD, CSWE, AACSB, etc.) and the department’s mission and goals.

Case #3, Rule #3: Consult, consult, consult! Clearly this junior faculty member’s situation was a mess. The department needed to uphold its standards but also needed to really consider whether it was willing to take the effort required to support this young man. In this kind of case, the chair needs to consult with the dean as well. No good dean ever takes a line away if the department determines that a faculty hire was not a success. To do so would “punish” departments from giving negative reviews even when warranted, resulting in a weakened college. But the dean can also consult with the provost, human resources, university counsel, or the university contract administrator, depending on the institution, to discover whether it is possible to stop or delay the tenure clock, provide for FMLA leave, or determine if there are other options to explore.

The moral of the story

Departments are often compared to families. They may be happy, productive, and collegial, or they can be dysfunctional and filled with petty hatreds and annoyances. Unhealthy departments can distress students, affecting recruitment, retention, and graduation rates. They can sour alumni relations, scare off potential faculty, adversely affect staff, and damage the department’s reputation both internally and externally. Getting the evaluation process right is critical to building and sustaining healthy departments.

At the time of publication, Kate Forhan, PhD, was provost and vice president of academic affairs at the University of Southern Maine in Portland.