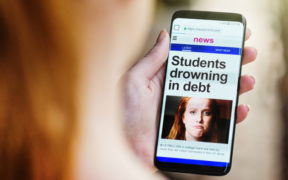 The US finds itself at a crossroads as it confronts the challenge of repaying student loan debt. Over the past 30 years in Michigan alone, state support for public colleges has flipped from about 75 ...

The US finds itself at a crossroads as it confronts the challenge of repaying student loan debt. Over the past 30 years in Michigan alone, state support for public colleges has flipped from about 75 percent of the revenue budget at regional universities to around 25 percent.

With decreasing state aid, the resulting increases in tuition have created a generational challenge in terms of the debt many students face upon graduation.

The problem is clear. The question is what to do.

While state funding to universities may have dropped, there still are creative student loan repayment programs available, including federal income-based repayment plans. And while some of the 2020 presidential candidates have proposed student debt cancellation and free public higher education, and the topic in general has certainly spawned a national dialogue, those potential changes are still down the road.

In the meantime, here are three examples from one university of how institutions themselves can directly reduce students’ financial burdens in the meantime.

Creating a program that can forgive student debt is one way to reengage students who have had to drop out due to financial struggles. Many universities have developed programs that do just that—wipe a portion of student debt for successfully completing courses—but Eastern Michigan University (EMU) takes a distinct approach to debt forgiveness.

EMU’s program, called the Eagle Engage Corps, offers debt forgiveness (the university writes off the debts) in exchange for a commitment of community service. The first group of 12 students to return to classes under its debt-forgiveness program is now successfully heading toward graduation.

Getting buy-in from stakeholders was the first step. After insisting that this approach to reengage our students clearly aligned with EMU’s mission and vision and that it was something at a small level we had capacity to do, we received overwhelming support.

The creation of this program, however, did not come without roadblocks.

There was initial resistance to forgiving debt to reengage students. Several students had been contacted by debt companies to no avail; this program gave many a lifeline to reengage and forgive.

We also had to be creative in our efforts to reach the former students that we wanted to reengage. As many of them no longer check or have access to their university email accounts, we knew that email was not going to be a successful means of communication. Many students who stopped out still engaged with EMU and with alumni through social media, so when the program launched, we advertised on Facebook and LinkedIn to promote the program and crafted press releases that were picked up by local media outlets. As the program reaches each new milestone (a new semester, a new graduate, etc.), we have sought to promote the program, keeping it in the news and on social medial. We also continually purchase virtual advertisements.

Despite such challenges, the university community, alumni, and faculty believe this program affirms EMU’s mission to both be a school of opportunity and foster impact locally and globally.

Why is it in other schools’ interest to try to implement such a program, and how is it in their power to actually do so?

For other schools looking to replicate a similar program, we believe it is a wise decision.

The ROI is great, as returning students pay tuition for new classes, which represents more money than amount of debt forgiven. In fact, in the first semester of this program at EMU, $50,000 in tuition was collected and $17,000 in debt was forgiven.

Eastern’s Education First Opportunity Scholarship (EFOS) program has been effective in helping academically talented students who are financially at-risk. Many of the recipients are also first-generation college students. First introduced in the 2012–2013 academic year, EFOS is designed specifically for this population.

EMU provides the funding for the EFOS program. The scholarship is intended for incoming freshmen who are Pell Grant eligible and have earned a 3.0 high school GPA and an ACT composite score of 20 or a 1030 SAT score. The scholarship covers full tuition minus the Federal Pell Grant.

Currently, EMU has more than 1,200 students with this award, with each entering class having around 450 recipients. The entering first-year cohort of 2013’s six-year graduation rate was 11 percent higher than the non-EFOS graduation rate.

A key consideration for many families paying for college is budgeting and planning for the challenge that lies ahead.

The 4WARD Graduation Scholarship at Eastern gives students free tuition in the final two years of their program when they pay the first two years. It is designed to simplify and reduce costs for parents and students as students begin their college enrollment; the scholarship began in fall 2019.

To participate in the program, students are required to live on-campus for each of the four years of attendance at a locked-in room and board rate of approximately $10,500 per year, which includes a standard double room and a standard meal plan.

The idea behind the scholarship is simple: to bring economic certainty to the college budgeting and planning process for prospective students and their families.

The student debt crisis and the obstacles that low-income, first-generation students and others face will not go away anytime soon—though as stated above, we’ll keep our eye on the presidential candidates and their efforts to reverse the crisis. While the skyrocketing tuition rates and some universities’ mandatory room and board requirements don’t help the crisis, dwindling state support remains a huge contributing factor to it. But by deploying some of these programs or other creative approaches, universities can help make significant progress toward helping students attain their degrees.