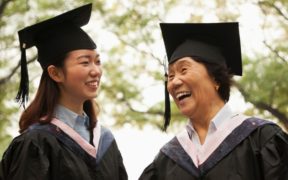 During a brief trip to Beijing, China, during which I presented seminars at three major universities, I had the opportunity to learn more about the Chinese system of higher education. I spoke with a number ...

During a brief trip to Beijing, China, during which I presented seminars at three major universities, I had the opportunity to learn more about the Chinese system of higher education. I spoke with a number ...

During a brief trip to Beijing, China, during which I presented seminars at three major universities, I had the opportunity to learn more about the Chinese system of higher education. I spoke with a number of professors and graduate students and learned about their perspectives on the educational process at the most competitive research universities in Beijing. Many American professors will have students from these universities in their academic programs, since Chinese students often pursue doctoral degrees abroad, and it may be helpful for American educators to understand how top tier Chinese institutions differ in curriculum, pedagogical style, and research expectations from their American counterparts.

[perfectpullquote align="right" size="22"]Students at Beijing University arrive at classes a half hour or an hour early to reserve a seat in a 200-student lecture hall. [/perfectpullquote]

The Chinese system of education is highly competitive and based upon an entrance examination system. Students as early as middle school begin preparations for their future majors. For example, a musician in a prestigious philharmonic orchestra in Shanghai explained to me that students had to choose their musical major in middle school in order to begin the intense preparation for a future musical career. The quality of education varies significantly within China and students in the major cities like Beijing, Shanghai, Guangzhou, and Shenzhen have greater access to educational resources that facilitate college preparation than those in the outer provinces of China. Entrance to an elite university in Beijing is very difficult, and sometimes only a limited number of students from the outer provinces are successful in the process. One student from Yunnan province in Western China spent three years studying for the exams leading to entrance into the master’s degree program at Beijing University, having taken the exams twice.

Students realize that going to college as an undergraduate in a major university in Beijing is the key to a chance to study abroad. Undergraduate programs at prestigious universities like Beijing University or Tsinghua University are more likely to lead to overseas study. For this reason, several professors told me that their most promising students are undergraduates. Once the students have completed their bachelor’s degrees at top-tier Chinese universities, many pursue doctoral degrees abroad. Some may complete master’s degree program before seeking opportunities overseas or be invited to spend a semester at an American university to undertake specific research for a semester or two.

The structure of universities is markedly different from institutions in the United States, with the president at the helm of the institution as well as a party secretary. Depending on the qualifications of the president, he or she can hold greater or lesser sway in comparison with the party secretary. Each academic program or department has a department chair or head who evidently has significant authority with resources and staffing. The department leadership structure also includes a party secretary representative who sometimes serves in the capacity of vice chair. Although there are vice presidents within the organizational structure, deans are relatively rare and do not hold the kind of authority typical of American institutions. The reporting structure for academic department chairs is to the president or intermediate vice president. Faculty may or may not be members of the Communist Party.

When asked about differences between the American and Chinese educational systems, the graduate students I spoke with indicated that, due to the reverence accorded to their professors, the perspectives of teachers are not challenged in China. Compared to their American counterparts, Chinese students are highly unlikely to express dissent with professors’ opinions. In the words of one student, it would be “unthinkable.” While in the American classroom, professors often encourage debate, Chinese students may reserve their opinions and concerns for office hours rather than for discussion during class time. According to one student, the desire not to engage in debate during classes is viewed as saving other students’ time in the educational process. Similarly, in discussion group settings, students tend to seek middle ground rather than to engage in conflicting debate.

The undergraduate curriculum includes required courses in Marxist and Socialist thought, as well as a strong emphasis on English language. The educational process has a greater emphasis on rote memorization and much less emphasis on writing seminar papers. As undergraduates, students may have had less opportunity to develop critical thinking skills. In addition, while many research materials and articles are available online, access to books that promote greater understanding of different scholarly arguments may be more limited. One graduate student told me, however, that this phenomenon is changing due to on-going educational reform in China that began in the late 1970s.

An interesting comparison with American students is the determination of Chinese students to never miss a single class or lecture. Students at Beijing University arrive at classes a half hour or an hour early to reserve a seat in a 200-student lecture hall. If the students come five or 10 minutes before the lecture, they will have to sit on the floor or stand outside the lecture hall to listen. Auditors are plentiful as students seek additional opportunities to learn. And study tables in the library, according to this graduate student, are crammed, and sometimes students must circle for 10 minutes or more to find an open table.

The pedagogical style of professors tends to differ from the Western approach of presenting arguments for a thesis and then amplifying issues through case studies. A graduate student who had studied in both American and Chinese universities noted that Chinese professors tend to have a more free-flowing, stream-of-consciousness style. The student observed that this kind of thinking process could be tied to a tradition from antiquity that emphasizes intuition and instinct over logic and structure. From this perspective, she believes that both the free-flowing Eastern and methodical and analytical Western academic traditions could benefit from each other in reaching meaningful research conclusions.

In terms of scholarly research, since some fields such as sociology and philosophy are relatively new to the university, the critical frameworks are largely borrowed from the West. The government has, however, been encouraging the development of Chinese-based frameworks. As one graduate student explained to me, the typical approach to research problems by Chinese student is different from their American counterparts. She observed that her American colleagues prefer to problematize a given issue and delve into the significance and mechanics of it. By contrast, in her view, Chinese students tend to rely more heavily on the conclusions of existing research and then add some minor variants or what she termed “brush strokes.” Thesis topics are picked by advisors at the graduate level and while American students may choose issues that reflect personal interests and attachments, Chinese students’ choice of topics are often not closely related to life experiences.

I was surprised at the high level of English displayed by the students and their ability to express themselves cogently and fluently in a foreign language. Although there is a great deal of emphasis on English from middle school upward, their language skills enable them to carry on lively discussions and present thoughtful and nuanced perspectives and arguments.

In my discussions on Asian Americans and the model minority myth, most of the graduate students had not previously heard of the myth. Since Chinese culture is largely homogenous, race-based issues are not part of the predominant social reality. The students, however, understood clearly the nuanced relationship between performance and success, explaining that in Chinese society as in American society, interpersonal relationships, class-based differences, and other factors come into play. One student expressed concerns after class to me about the lumping of different Asian groups together in the American cultural perception, despite marked differences among these groups in history, culture, and demography. He wondered how he could go about reconciling these differences in his own thought process.

The students were highly engaged in the classroom and enjoyed the same types of jokes that Americans respond to. They follow American politics closely and are very aware of current political developments, which are surprisingly well reported in the press. The students indicated, however, that there is a sharp contrast between the major cities and the countryside and noted that their level of assertiveness is not typical of the traditional Chinese norms present outside the cities.

The benefits of interaction between Eastern and Western educational systems offer significant promise for enhanced scholarship and research inquiry. The talented students I met will undoubtedly contribute to the advancement of knowledge and growth of rich cross-cultural understanding as both systems seek to prepare their graduates for participation in an interconnected global society.

This article first appeared in the June 2018 issue of Academic Leader. © Magna Publications. All rights reserved.