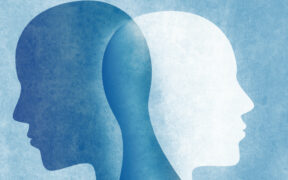 Nearly everyone finds twins interesting. That is so, in part, because twins are relatively rare, with only three or four out of 1,000 births producing twins and only about 25 percent of those being monozygotic—the ...

Nearly everyone finds twins interesting. That is so, in part, because twins are relatively rare, with only three or four out of 1,000 births producing twins and only about 25 percent of those being monozygotic—the technical term for “identical twins.” Even more rare are those identical twins who are known as “mirror twins”—identical twins who have opposite physical characteristics. Since the zygote has split a week or so after conception into two facing halves, it is logical to find that some identical twins have this “mirror” characteristic. One of the pair may be left-handed and the other right-handed; it may even be that one is myopic in one eye while the other is myopic in the other eye. There is anecdotal evidence—and much fascination—with accounts of mental telepathy between identical twins and even such nongenetic factors as independently in later life deciding to buy an automobile of the same brand, model, and color!

At this point you might be wondering, What does all this twin talk have to do with academic deaning (not a real word, but it should be!)? Well, since you asked, let me just say that the above description of identical mirror twins in extremely rare instances may characterize two young men who earned PhD degrees, became full professors in similar academic disciplines, and then became deans of liberal arts institutions of higher education—namely, yours truly and my brother John. And, yes, we were born with an opposite myopic eye, John a left-handed former star pitcher in high school and college and I a right-handed catcher, infielder, and team captain—and we did indeed later show up at our childhood home one Christmas driving new white Honda Accords we unknowingly (to each other) purchased when he lived in Tennessee and I lived in South Carolina. I have photos to prove it! Over four years of high school our academic average differed by .03 percent, and over four years in the same liberal arts college, both of us double majoring in English and psychology, differed by only .07. Humility keeps me from saying who was ahead both times.

How does having an identical mirror twin affect the academic lives of such deanly anomalies? Again, thanks for asking; we have now both left the academic work we loved as professors and deans—he by an untimely demise from a rare kidney disorder and later cancer more than a decade ago and I by retirement in 2015. I spend much time now reflecting on the common events in our lives—athletic endeavors, living as roommates after we had been “wombmates,” teaching English in rival prep schools in Baltimore after we finished MAT programs at Johns Hopkins, serving as “best men” in each other’s weddings to our lifelong marriage partners, and engaging in shared discussions about our work as academic deans—he for the College of Liberal Arts at Middle Tennessee State University and I for the College of Arts and Sciences at Converse College (now University) in South Carolina.

Academic deans are often without close colleagues, even though we all work closely with fellow administrators and, of course, our faculties; ultimately, the duties of the dean are often his or hers alone to master, and decisions about policy and personnel must be handled individually and discretely in the splendid isolation of a well-appointed office in the academic building on campus. When those are the challenges, having a mirror twin is indeed a blessing as these challenges provide opportunities for candid telephone and email discussions that might otherwise not be available. Having someone not in your own institution who can provide an objective assessment of a thorny decision can bring a fresh perspective to any number of perplexing issues. An academic leader without a twin to offer counsel and support might well consider ways to invent such a partner for mutual benefits not available in the home institution.

One particular collaborative endeavor we twins enjoyed was a series of essays for Academic Leader where one of us would advance one side of an academic issue—such as the value of student evaluations of courses—with the other twin taking the opposite side of the debate in the following month’s issue. Great fun and a useful academic exercise for us and readers of AL! After all, debate and reasoned argument are essential ingredients of any dean’s academic life and work.

Reflections in a mirror

While I surely miss the many discussions and friendly debates we had over the years—as students, professors, and deans—my ongoing reflections are a source of joy and comfort; we mirror twins were successful as a unit of two, on the athletic field (called “The Touchdown Twins” by some newspaper reports of our exploits in football) and in the classroom, but also found our individual voices and values along the path all deans must map for themselves. To be valued not only as twins but also as individuals was our implicit goal; each morning as I look in my mirror at home, I see my counterpart raising his right hand to shave what appears to be the same side of my face. Mirrors do indeed show us two sides of ourselves.

Thomas R. McDaniel, MAT, MLA, PhD, is the author of some 300 articles, chapters, and reviews in 60 different journals as well as nine books, including The New Dean’s Survival Guide (Magna Publications, 2019). He is a former dean, provost, and senior vice president at Converse College.